How is nature recognised in the English planning system? 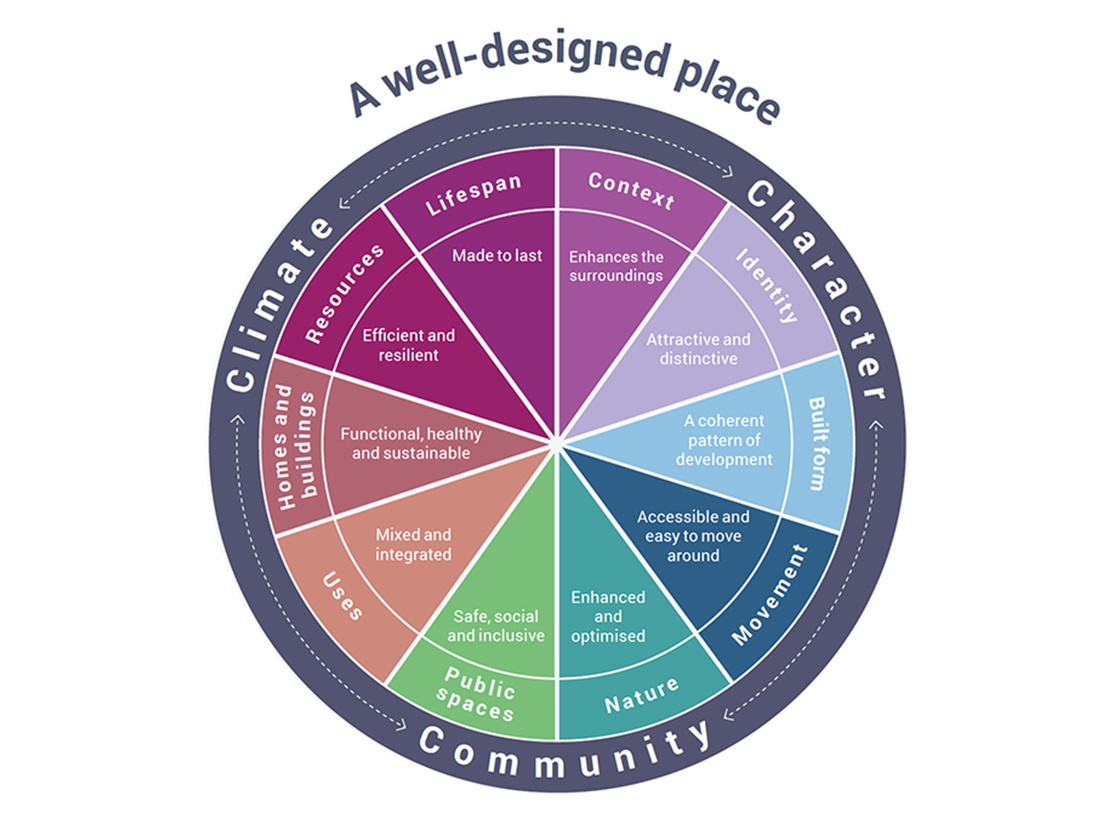 The National Model Design Code published by the Ministry of Housing, Communities and Local Government in January 2021 places the design of public space and the role of nature as key priorities for consideration in determining the quality of placemaking. Other provisions provide really important context that, properly applied, will allow nature to thrive.

The Code is a significant contribution to the armoury of Material Consideration for use by Local planning Authorities and Planning Inspectors when determining the quality of planning applications. It fits within a hierarchy with the National Planning Policy Framework at its apex, requiring that development that is not well designed should be refused permission, especially where it fails to reflect government guidance and local codes as supplementary planning guidance.

The Code represents the interrelationship between these factors as a diagrammatic wheel that nicely expresses a holistic approach to bringing nature home. The code addresses the need for a network of spaces to create a well connected biophilic infrastructure, working with water, assessing biodiversity and achieving net gains in diversity as well as a favourite topic for the Secretary of State – street trees.

The National Planning Policy Framework (NPPF) was revised in July 2021 and now gives greater weight to the National Model Design Code as a default, albeit without statutory weight, in the requirement for Local Planning Authorities to use design codes as a basis for approving or refusing planning applications. There is much more emphasis on including trees in new development, (think: tree-lined avenues, roads, streets, and lanes) as well as on climate change – but no mention of achieving net zero by 2050 – a curious omission. There’s a lot of reference to achieving ‘low carbon’ but nothing more substantive.  There are many references to ‘beauty’ – these are pepper-potted throughout, as a direct result of the findings of the Building Better, Building Beautiful Commission published in 2020.  At the launch of the revised NPPF the Secretary of State made frequent references to the requirement for new places need to be beautiful, greener, and enduringly popular (he mentioned that the latter many times).  So while the NPPF calls loosely for a more sustainable, greener environment there is nothing specific to aim for and no solution to the question of who pays raised in another blog on this site.

The Housing Ministry has said it intends to carry out a ‘fuller review’ of the NPPF in response to concerns raised over how far this week's changes promote the government’s commitment to achieving net zero emissions by 2050 and to ensure that national policy contributes to climate change mitigation “as fully as possible”.

Following the #StateOfNature campaign, England is the first country ever with a target law to halt the decline in nature.  However, since the announcement in May there has been criticism that the government need to introduce interim targets for the plan to work.

Natural England published BNG metric in July 2021, outlining how new roads, houses and other building projects must achieve no net loss of biodiversity, or achieve a 10% net gain elsewhere if nature is damaged on site.  This has been challenged as inadequate and even dangerously misleading as the framework fails to recognise the value of significant species common as scrub on undeveloped land.   Some are understandably lobbying for the government to introduce legally binding targets for nature similar to the UK climate laws.

London is unique in having a much clearer set of regenerative requirements aimed at creating a more biodiverse city: ‘Urban Greening for Biodiversity Net Gain: A Design Guide’ sets out the Greater London Authority’s approach to biodiversity net gain (BNG) .  The London Plan policies G5 Urban Greening and G6 Biodiversity and Access to Nature together require developments to make urban greening a fundamental element of design and to deliver net gains for biodiversity. In practice this means thinking about how buildings and landscape function as well as look, and ensuring a development leaves nature in a better state than before it happened.

It’s hard not to conclude that much more needs to be done to restore the destruction of biodiverse ecosphere.  The GLA’s framework for biodiversity net gain, applied nationally, looks like it might be a good starting point.