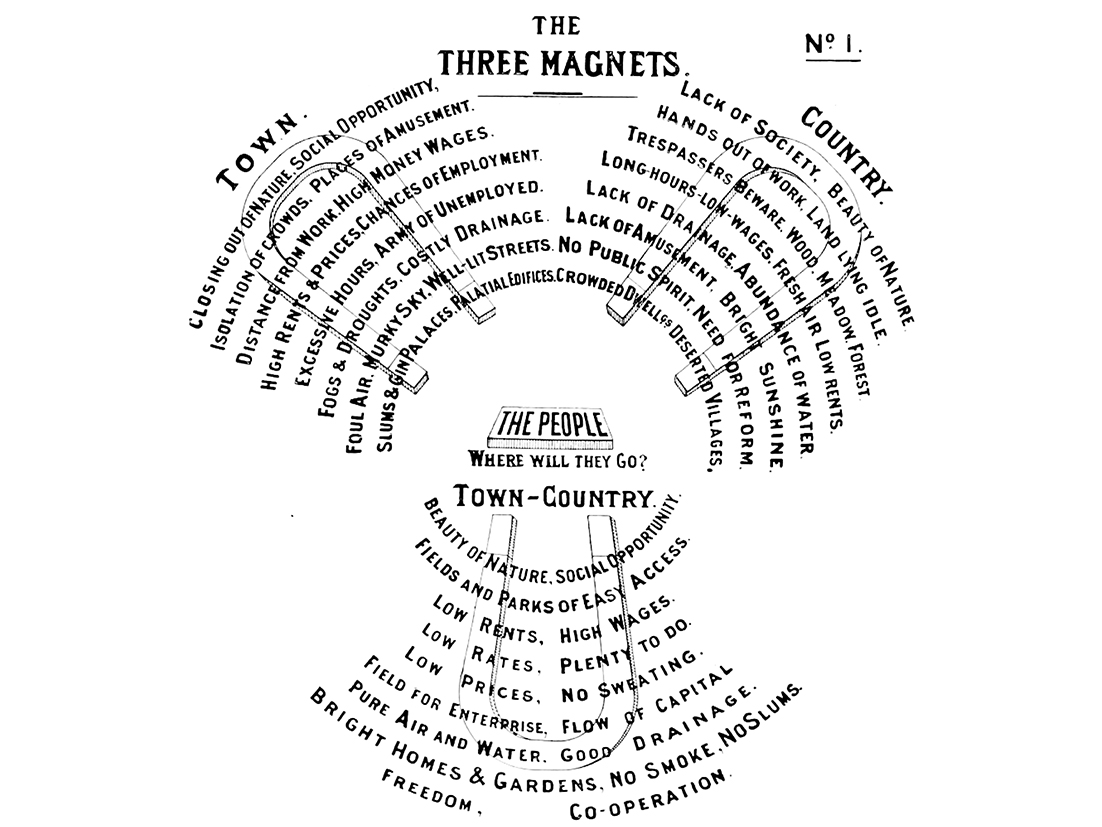 ‘Yes, the key to the problem how to restore the people to the land – that beautiful land of ours, with its canopy of sky, the air that blows upon it, the sun that warms it, the rain and dew that moisten it – the very embodiment of Divine love for man – is indeed a master key for it is a key to a portal, through which even when it is scarce ajar, will be seen to pour a flood of light on the problems of intemperance, of excessive toil, of restless anxiety, of grinding poverty – the true limits of Government interference, ay, and even the relations of man to the Supreme Power.’ Ebenezer Howard.

These are the terms in which Ebenezer Howard described his utopian vision in ‘The Garden Cities of Tomorrow’.  This idealistic, even romantic, vision is accompanied by an elaborately precise prescription for how such an outcome might be obtained – from the acquisition of the land, the principles of development, development value capture for community benefit, urban design, the provision of infrastructure and services, the governance and management of place.

Howard’s vision led to the formation of the Garden Cities Association, latterly the Town and Country Planning Association, and to the creation of a development company, First Garden City Ltd.  Two settlements in the Hertfordshire countryside, north of London, were built according to many of the principles set out in the Garden Cities of Tomorrow; first Letchworth, then Welwyn Garden City.

The late sir Peter Hall points out, in his Foreword to the 1985 edition of The Garden Cities of Tomorrow, that many of the fundamental principles of the movement remain relevant to this day. The idea of recouping development values for the benefit of the local community estate, the concept of harmonising development with the natural environment, the social and economic value to be derived from providing people with a decent environment and the need to optimise resources through planning were all central to the vision.

While these principles may not be applied in all cases of development, the ethic and sentiment of placing nature at the heart of how we design and plan our urban and townscapes has the impetus to not only offer an increased quality of life but also alter our relationship with the natural world. Models like the Garden City Movement demonstrate co-existence with nature is possible and can be viable. The principles mapped out by Howard are not dissimilar to make of the ambition in our Planning White Paper now, an appetite and yearning for integrating how we live with he natural world still remains today.

We must learn from the past, taking inspiration for our future.

How is nature recognised in the English planning system?